The Virginia Science Festival is taking place today, Nov 16, from 10am until 4pm, with a series of lightning talks to follow. The event is geared for young people, but it’s enjoyable to everyone. There are dozens of projects featured at the event, many hosted by the College of Science, the College of Engineering, the Center for Human Computer Interaction, the Institute for Creativity, Arts, and Technology, and lots of other clubs and organizations at Virginia Tech and in the area. As in years past, Tech on the Trail has some projects at the event:

The Spring 2018 school term provided the opportunity for senior undergraduate students in computer science to take part in client-based projects related to technology on the trail. Each project was asked to address some trail-related problem through a tech implementation. Below is a summary of the projects that they undertook.

NOTE: some of the students continued their work on the projects, and others were continued by grad students and clients toward being incorporated in grants, papers, theses, and dissertations. This post has been and will continue to be updated with links to new papers.

At the 2018 ACM SIGCHI Workshop on HCI Outdoors, the organizers and participants decided it was time for an academic book that captured key advances in this area.  Scott McCrickard, Michael Jones, and Timothy Stelter were selected to edit the book, to be published as part of Springer’s HCI series in 2020.  The book, to be titled HCI Outdoors, will describe human-computer interaction (HCI) challenges and opportunities in outdoor settings for communities, groups, and individuals, in domains to include recreation, education, citizen science, wellness, and games. Scales of impact include individuals with personal devices, small groups using technology to support common goals, and large communities of people whose ways of doing and being are affected by outdoor technologies.

The book will be used in a combined grad/undergrad course in Fall 2019, also titled HCI Outdoors, in which course participants will read chapters toward identifying common themes and connections between them, and will craft prototype-centered projects inspired by them. Chapter authors will be invited to participate through invited talks, project sponsorship, writeup responses, or other means.

More information about the book, including how to participate and tentative chapter titles and authors, can be found on the main book site at http://hcioutdoors.net/book/ 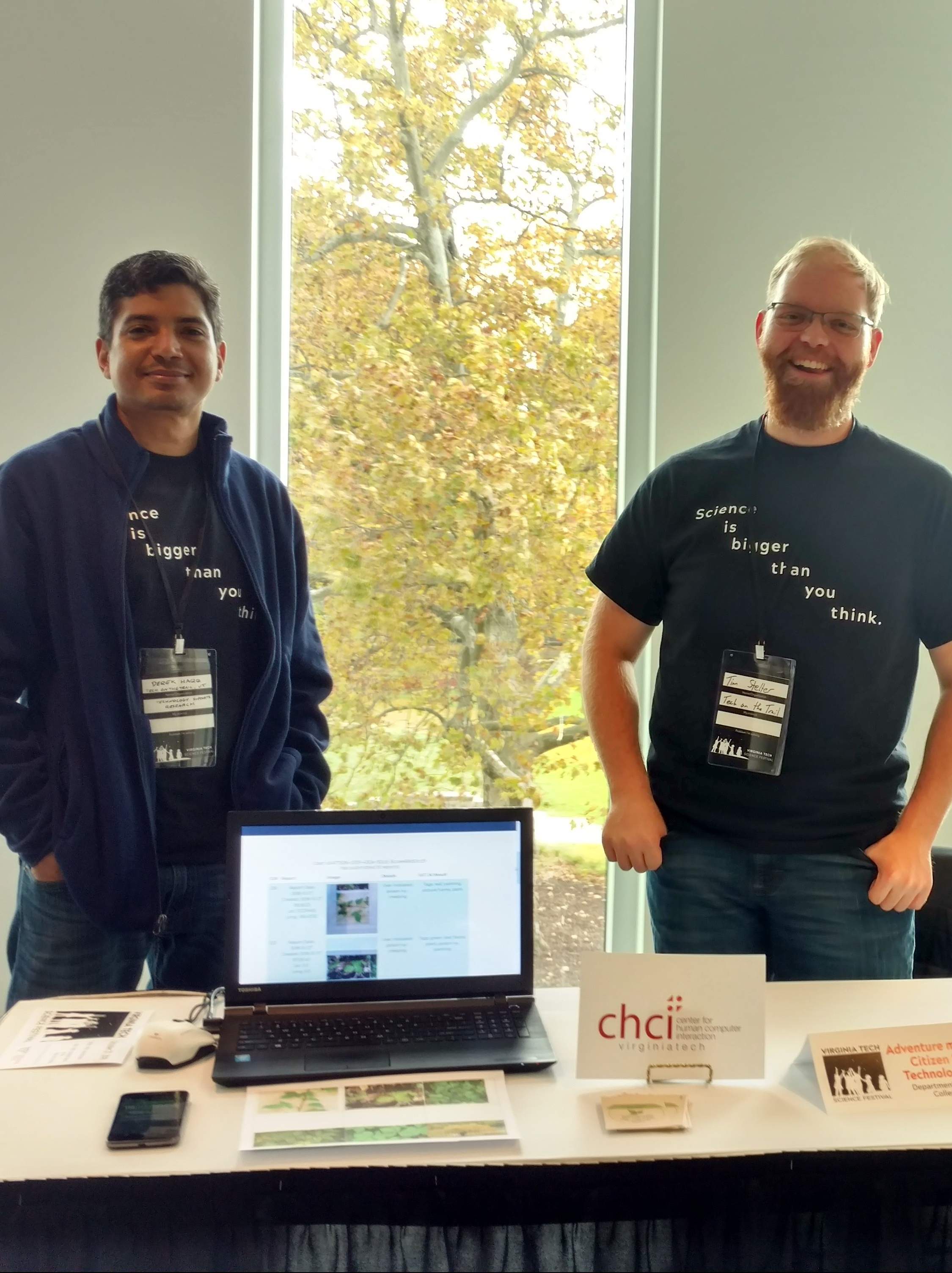 Derek and Tim are ready!

Big thanks to everyone who came out to the festival.  It’s been growing every year, and we’re happy to be part of this showcase event for ICAT and the region.

Front and rear views of BarkLight

There are tons of “American journey” stories out there, and authors can struggle to find an interesting angle toward authoring a book or blog or such. Rinker Buck certainly can’t be called uninteresting in his choice of adventure: re-creating the Oregon Trail in modern times using the same style of ox-drawn covered wagon employed by the settlers.

Rinker Buck’s book The Oregon Trail: A New American Journey chronicles his journey along the Oregon Trail, a gateway across America taken by settlers in the early 1800s.  The book notes that the notion of a single “Oregon Trail” is deceptive, as there are many paths that were used by settlers making the journey west. Parts of the trail have become roads and highways and some goes through private property, but much of it is far from civilization, so the author had to choose a path that was safe, legal, and enjoyable.  The book balances stories about traveling through wilderness and traveling on modern roads in an old-style vehicle, interleaving the history of the trail and observations about the people that he met along the way.

As always, I kept an eye toward tech use, which was not at all a focus of the book.  The author had a mobile phone on his journey that he occasionally used, but generally he relied on the oft-present kindness of people that he encountered along his journey.  He certainly had a lot to say about the role of technology in enabling trail travel, then in making it obsolete–focusing on tech advances in transportation, manufacturing, and farming. In reading between the lines, the author seemed to intentionally avoid writing about personal technology use, seeking to add to the air of authenticity regarding their journey.

Overall, the book was entertaining and very well written, certainly worth a read both for the historical perspectives and to learn about a meaningful trip across America.

The Spring 2018 school term provided the opportunity for senior undergraduate students in computer science to take part in client-based projects related to technology on the trail. Each project was asked to address some trail-related problem through a tech implementation. Below is a summary of the projects that they undertook.

NOTE: some of the students continued their work on the projects, and others were continued by grad students and clients toward being incorporated in grants, papers, theses, and dissertations. This post has been and will continue to be updated with links to new papers.

Navya Kondur successfully defended her thesis titled Using K-Mode Clustering to Identify Personas for Technology on the Trail on April 19, 2018.  Navya wasn’t originally thinking to do a thesis when she started examining some of the questionnaire results from Gracie Fields’ thesis, but Navya identified some interesting questions within Gracie’s data sets and, most importantly, a new way to examine the data.

Navya presented some preliminary results at the GROUP 2018 workshop, receiving some great feedback from Mike Jones, who has been working on some similar persona creation activities. Navya’s background in statistics served her well in highlighting some possible ways to analyze results from some of Gracie’s data sets; specifically, by using k-mode clustering to identify groups of like-minded hikers.

K-mode clustering is a method to identify clusters within categorical data.  It is a modification of the more popular k-means analysis, adapted for use with categorical data such as types of gear that people bring on hikes, sleeping preferences when on multi-day hikes, and selections between paired “would-you-rather” options (as featured in Gracie’s thesis work).  Navya administered a series of “would-you-rather” questionnaires at various Tech on the Trail events, collecting sufficient data to craft clusters.  Since the clusters are not particularly descriptive or evocative, Navya then crafted five personas that helped to reflect some of the differences among hikers; e.g., younger people embrace technology but lack the money for it.

Navya’s thesis really helped to highlight the possibilities in her line of research, particularly with regard to k-mode clustering and persona identification–though the small number of participants yielded a small number of clusters.  However, her work has resulted in a funding proposal that seeks to identify the nuances between people on trails, and, if funded, we will be on track to publish a large-scale examination of this domain in the future (and maybe we can talk Navya into returning to VT for her Ph.D.)  Until then, check out details about this work in Navya’s GROUP workshop paper and (when released) thesis document.